If ever there was an example of using the best of Thailand and the best of Australia to produce a world-leading product, you’d have to look no further than the team at SeaCat Ships Co Ltd, led by director Paul Birgan. Tucked away in an unassuming production facility at Ocean Marina just south of Pattaya, the team of Thai and Australian workers are able to produce state-of-the-art aluminium catamarans ranging from six meters for eight passengers, to an impressive 42 meters capable of carrying 440 passengers.

These are serious ships, whether it be for luxury cruising, fast-ferry operations or demanding commercial applications.

The SeaCat Ships story of setting up shop in Thailand is familiar one. Facing a shrinking market in Australia, the team at SeaCat’s saw little option other than to expand their market offshore. After evaluating options for an Asian operational base, Thailand came out on top. Mostly due to a combination of its proximity to Asian growth markets, quality labour force and generous Board of Investment incentives.

The Ikea comparison soon ends, however, when it comes to assembly, this is not a do-it-yourself job. In fact, fabrication is where Thai skills (and its cheaper labour force) come to the forefront.

Assembly in Thailand occurs under the watchful eye of Paul’s brother, Murray Birgan (Project Manager) and other Australian and expat tradesmen. With decades of boat-building experience between them, they are passing their skill set onto their Thai staff, manny of the which already had experience in aluminium fabrication and were quick to pick-up on the specialised requirements of SeaCat Ships.

The Australian trade based production team credit the foundation of their success to vocational training in Australia’s TAFE system.

SeaCat’s have 4 expatriates, 5o Thai staff and a further 20-30 parttime Thai subcontractors. And any new contracts here are certainly good news for Australian workers. Paul estimates there are at least 20 Australian companies producing components for his ships, with millions of dollars of work and many jobs generated in Australia.

Asked about advice he would give to other Australians considering establishing a business in Thailand, Paul says, “We weren’t sure about the banking system and there were just a lot of unknowns. We got over that by talking to people with on-the-ground experience and doing our own research. Now I’d say to any manufacturer that there’s a great commercial opportunity here in Thailand. Don’t completely move over here, but use it as a way of supporting your existing operations. It is a gateway to the rest of the world. For us, the future looks bright.”

SeaCat Ships has been granted Thailand Board of Investment (BOI) approval and associated incentives with the following advantages:

Thailand thus became not just a production base, but a strategic launching pad for reaching into regional and global markets.

The high-performance vessels produced by SeaCat’s are truly a Thai-Australia endeavour.

Production begins in Australia and Singapore with the computer blueprint being broken down via the Maxsurf software into individual components and shapes. These are marked-out on large aluminum plates, computer-cut,

When all the aluminium components are ready, they are loaded into shipping containers as a ready-to-assemble kit – similar to a piece of Ikea furniture – and sent to Thailand. 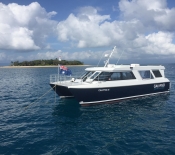 SeaCat Ships is proud to announce the commencement of our 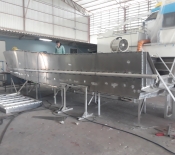 Given the success of 'Bargeass,' our versatile 8.5metre, high speed 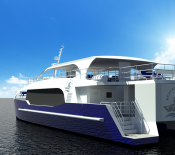 We are thrilled to announce that our 23 metre spec boat has been sold! 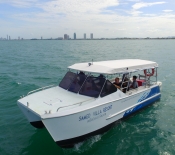 We are proud to announce the completion The Surf Cat 850!